We are back on tour this Easter!

It’s bright, it’s bold, it’s colourful. It has songs children know and love (and can sing along to) and, above all, it’s FUN!

How Lion Became King Of Tinga Tinga Land is one the best children’s shows around for three to seven year olds. It’s engaging, energetic and absorbing.

Of course that should come as little surprise because its writer and director is none other than Iain Lauchlan, the creator of Tweenies. One of children’s TV’s most seasoned presenters, directors, writers and producers, Iain also created Fun Song Factory and presented Finger Mouse, as well as the hugely popular Tweenies.

The story of How Lion Became King Of Tinga Tinga Land is straightforward enough. Banjoko the Toucan flies to Africa to warn all of the animals of danger that threatens their homeland.  Deciding a king is needed to ward off danger, a group of jungle animals vie for the job but when threatened by a pack of hungry hyenas they realise there is only one animal brave enough to be king, Lutalo the lion.

But the show is far more than just its narrative… it’s a complete visual treat and with enough action and audience participation to entrance even the shyest child.  Every animal has its own story and the musical arrangements that accompany the show provide an authentic African rhythm that gets even the most hardened toes tapping.

The costumes are designed by Linzi Potter who worked on the Lion King while the delightful accompanying (award winning) book by Brian Hill and Matthew Howorth has illustrations by D.W Murray who worked on Cars and Lilo and Stitch for Disney.

Exciting News! How Lion Became King Of Tinga Tinga Land is now available to buy from our shop. Order now to make sure you beat the rush.

First 1000 to buy the book will also receive the original Activity Programme free. 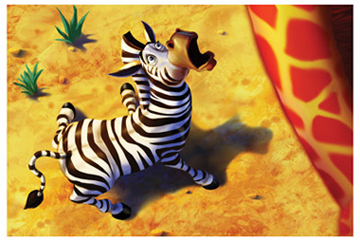